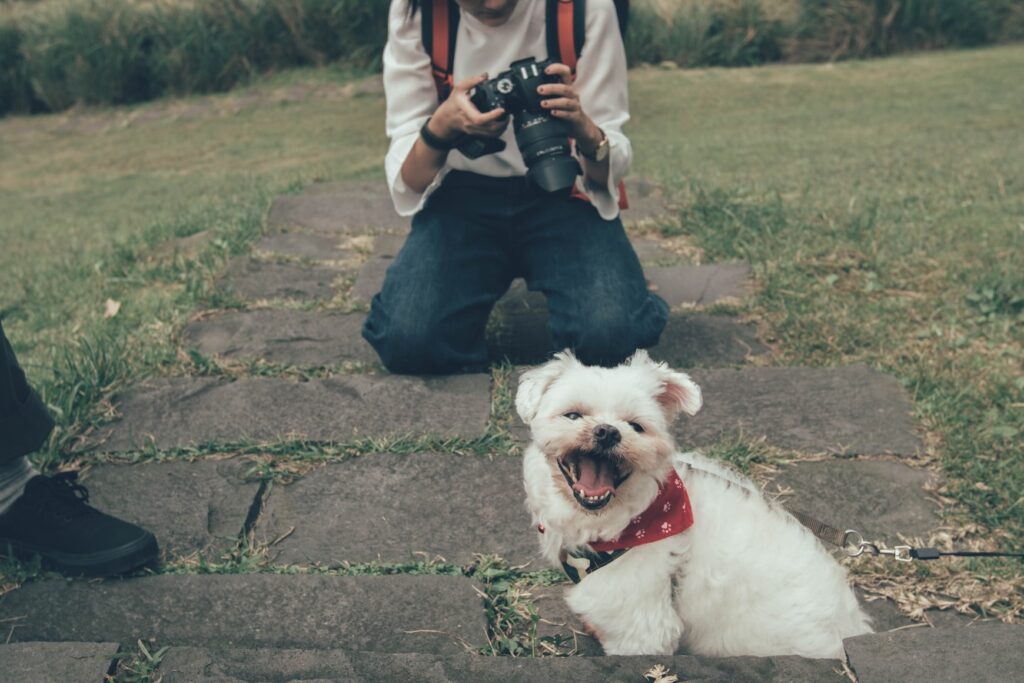 Whether you’re a professional animal photographer or just an adoring owner who loves to photograph their pet, you’ll find something useful to take your next photoshoot to the next level amongst these top tips from professional pet photographers Pupparazzi.

Whether it’s a cat or a dog that you’re photographing, you’ll find that taking a little time to have a chat with the owner and just being casual around the animal before you pick up your camera will encourage a sense of trust and allow them to warm to you slowly.

Sit down on the ground and let the dog or cat explore you and have a sniff. This also gives them a dominant position over you, which most dogs and some cats will like. It’s best to ignore them and not make eye contact during this time so they don’t become intimidated.

We’ve noticed that not making eye contact and pretending to ignore them works really well in getting them comfortable enough when you’re finally ready to interact with them. In fact, it usually makes them more eager to interact with you, which often surprises many dog owners who arrive believing that their dog would be anxious and unlikely to cooperate.

It helps to unpack your camera and other equipment and leave them nearby so that the animals can inspect them in their own time. Once they have had a sniff and realise it’s not a threat to them, you’ll find that when you raise the camera to your eye, they will likely be unfazed by it.

Reward Them With Treats

We all know that it’s better to train our pets (especially dogs) to respond to our voice commands rather than respond merely to treats. However, for short photoshoots, a little bribery with food will help create great photos.

Be careful not to overdo the treats as some dog breeds, such as Poodles and Cavoodles, can have quite sensitive stomachs, so if they receive more treats than they’re used to, the journey home could be eventful for the owner!

Our favourite treats for dogs are liver (Ziwi Peak seems to motivate all dogs!) or small pieces of cooked chicken. All animals are different though, so go with whatever works best for the pet you’re photographing.

Leave Your Dignity At The Door!

While treats usually work well to attract the attention of your subject, there are times when it doesn’t work at all and you have to get a little creative.

As photographers who often work with dogs on outdoor shoots, we go out with the expectation that we’ll be coming home muddy, wet and often exhausted. We’ve also tended to make ourselves look silly to onlookers with funny noises and antics. But we must do what must be done to get the shot, right?

So, if treats aren’t working, it’s time to roll out the secret weapons!

First in a pet photographer’s arsenal is making unusual mouth sounds. Some are better at this than others. Simon at Pupparazzi favours a low whine or a small squeak, which baffles most animals for a while as they can’t quite place which direction it is emanating from.

Once the effectiveness of the human-generated sounds start to wane, we move onto a small plastic squeaker – the type that some circus clowns and performers use that can be tucked under the tongue or in the side of the mouth to create high pitched squeaks and whistles.  These can be purchased on sites such as ebay or Aliexpress for just a few dollars, but users should be warned that they’re small enough to swallow. Be careful!

Our final suggestion for noise makers is a phone app with a selection of unusual and common noises that can be played at the touch of a button.  We find that the most popular for getting ears perked and heads cocked are a baby crying, donkey braying and whale songs.  Again, it’s worth playing around with this as each animal has its own preferences.

We hope that some of our suggestions above will help you create stunning pet photos for your home. Don’t forget that whenever you take photos with animals, the more patience you bring and the more you enjoy yourself doing it, the more relaxed you and the animal will be, which always leads to better photos.