The Border Collie puppy is one of the most intelligent dogs. They are supreme working and companion dogs more especially suited to those who have active outdoor lives. Border Collies are energetic and they always want being given things to do even in places with limited space such as apartments. If your Border Collie is given the correct amount of exercise, as well as mental stimulation on a daily basis, Border Collies will definitely make wonderful family pets. 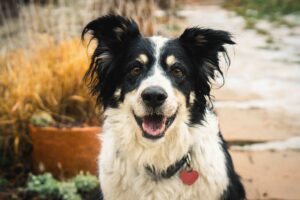 Border Collies can trace their roots back to one common ancestor, a dog named Old Hemp. Roman invaders to the British Isles in the first century brought with them dogs that were used to control and move their livestock. And very quickly, the dogs spread across Britain, as well as Wales, Ireland, and Scotland.

When the Roman Empire had fallen, the Vikings invaded England, another type of dog was introduced, a smaller herding dog that resembled the Spitz. And these dogs bred with the larger Roman dogs and the results were medium-sized dogs with longer fur that were well-adapted to the geography and climate of the British Isles, excelled a herding, and were agile and athletic – the forerunner of our Border Collie today.