The Great Dane is a large dog. Great Dane puppies are great family pets and companion dogs. They are very kind and playful, great with kids. They are also very loyal to their owner and family. Great Danes are one of the larger breeds and can have quite a short life span. They love nothing more than being part of the family and being involved in everything goes on in the household. 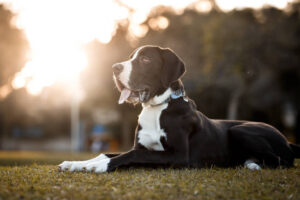 They were pampered and wore gilded collars trimmed with fringe and padded with velvet. The name Great Dane did originate in Denmark, as a man by the name of Buffon noticed during his travels that the slimmer varieties of the Boar Hound, shared great similarities with the Greyhound. He remarked that the Danish climate had caused the Greyhound to become a Grand Danois. Thereafter, the dogs were known as the Great Danish Dog. Larger Danes were often called Danish Mastiffs. The Danish name stuck, though Denmark had absolutely nothing to do with the development of the breed.