German Shepherd puppies are extremely loyal and intelligent, they can be a great choice as a family pet but they are also extremely versatile in a working environment. Over the years, German Shepherds has been used by police forces in many countries thanks to their intelligence, stamina, and the extraordinary scenting skills.

German Shepherds need lots of mental and physical exercise to be truly happy! They also need to be correctly trained. 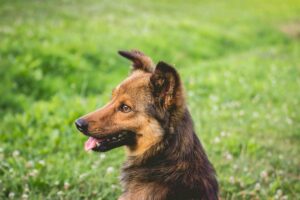 In Europe during the 1850s, attempts were being made to standardise breeds. The dogs were bred to preserve traits that assisted in their job of herding sheep and protecting flocks from predators.

In Germany this was practiced within local communities, where shepherds selected and bred dogs that they believed had the skills necessary for herding sheep, such as intelligence, speed, strength, and keen senses of smell. The results were dogs that were able to do such things, but that differed significantly, both in appearance and ability, from one locality to another.