The Pomeranian puppies are tiny dogs. They are also the tiniest of the Spitz-type dog. Pomeranian have a fox-like looks all wrapped in a bundle of fluff. These little dogs are very intelligent. Although they will form strong bonds with one person in a household, they are always friendly to other members and people they meet. 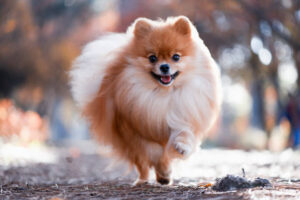 This tiny dog breed has originated in a region called Pomerania – a historical region located in the far north on the border of the countries we know today as Poland and Germany. The Pomeranian dog breed got named after that region since they were the most popular choice for both working dogs as well as companion dogs. However, the modern Pomeranian is very different than the dogs of old that the people of Pomerania were used to.