Boxer puppies are high energy dogs. They have a fun loving outlook and definitely love being entertained. Boxers are very loyal and they are good watchdogs even in a home environment. They will alert their owner know if there are any strangers about. Because they are outgoing by nature, they are great fun to have around, great with kids and be a wonderful family pet. 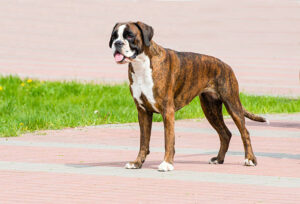 The history of the Boxer as a unique breed begins late in the last century in the area of Munich – Germany. The Germans did not begin to breed dogs scientifically until that time. According to Denlinger, “As far back as the time of the ancient Assyrians, more than 2000 B.C., a strain of dogs with powerful build, heavy head and great courage was bred and used in war. Centuries later the name of Molossian was given to dogs of this type, named from the city of Molossis in Epirus, in what is today Albania.” These dogs spread across the continent and became the ancestors to the German Bullenbeisser. In England, selective breeding produced a taller, stronger dog than the original Molossis and this formed the foundation of the modern Mastiff. Later, the English crossed their Mastiff with fast running hounds to produce the Englische Dogge, or Great Dane, the German national dog. However, the Germans continued to use the Bullenbeisser as a hunting dog.