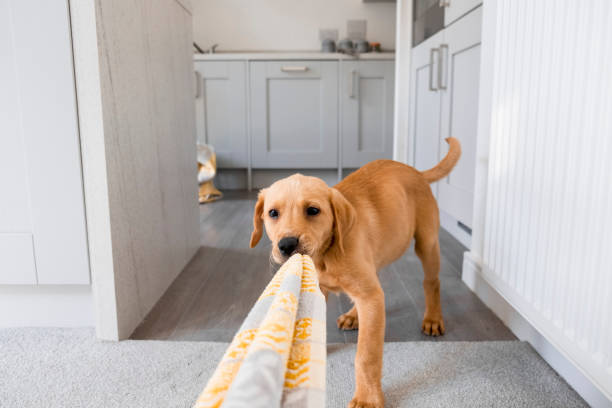 NIPPING IT IN THE BUD.

How to stop puppies from biting.

By Tony Knight the Dog Listener

In virtually every case, puppies are born without teeth. This changes very rapidly though; at around 3 weeks of age, the milk teeth start to emerge. By 6-8 weeks, they will usually have a full set of baby teeth. Their adult teeth can start to emerge as early as 8 weeks and by 7 months their adult teeth are usually all pushed through.

N.B. If it looks like your pup’s baby teeth are refusing to drop out once the adult teeth have emerged, a quick visit to the vets is a good idea. Overcrowding can lead to hygiene problems later.

Needless to say, the process of teething can tickle a bit! Gums can be quite sensitive as not one, but two sets of teeth push their way through in a relatively short space of time. A classic way to alleviate the discomfort with puppies (and their human equivalent) is to suck or chew on something.

With human babies, this can be relatively easily managed by giving them special teething toys. When I was a child, I had a teething ring with a silver charm attached. I am pretty sure that the ring was made out of ivory (which is both ironic and upsetting at the same time). Babies in France are given a soft rubber giraffe called Sophie to chomp down upon. However, most parents will attest to finding their little nippers (I wonder why they are called that?) with an item not sanctioned by the authorities in their mouths.

However, this does not excuse a puppy who uses their human as a chew toy. In this case, they must learn right away that this is not acceptable. Besides, those needle-like teeth really hurt!

The most important thing to remember is not to tell off your puppy should they bive you a nip. Even bad attention is attention; we know that some children (and some adults) will behave badly precisely because it gets them noticed. Whether this involves stealing or in some cases grabbing and nipping their victims, the idea is to get a reaction.

In the case of the latter, simply ignoring this is not feasible as this tactic can be painful, so it is a good idea to give a delinquent puppy a Time Out without speaking which a) shows that the behaviour doesn’t work and b) gives a consequence that it does not like. That can either be done by leading your pup into another room or outside so it is on its own or – to avoid any escalation if you are worried that your puppy could become aggressive – by everyone leaving the room. Either way, the pup finds itself alone. Animals that live in groups for safety do not like being on their own as they feel more vulnerable.

Time Out is the only form of negative consequence that I advise. Even then, it should be done as quietly and calmly as possible without causing physical harm to a dog. Everything else is positive with patience being the key to success. Giving your pup a choice and the time to figure it out for themselves leads to a stronger bond and better relationship. This concept is very diplomatic and corresponds to an instinctive need to belong to a group.

CAT BOARDING IN MY HOME